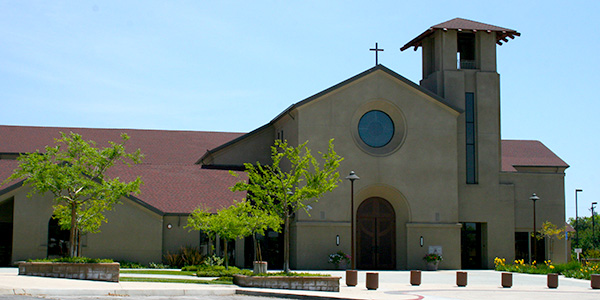 In November 1947, the Most Reverend Charles F. Buddy, Bishop of San Diego assigned Reverend John M. Tahany to begin a new parish in what was then known as the Yucaipa Valley. Within weeks of his arrival, Fr. Tahany gathered nine families for Mass at the American Legion Hall on California Street. A small residence on Beech Street served as the first rectory, and the first Christmas Mass was celebrated at the Yucaipa Women’s Club.

The original 3.5 acre parish site was purchased in 1948 for $3,500. In less than five months, the current church building with a seating capacity of 250 was completed at a cost of $40,000. The Diocese of San Diego provided the $40,000 in the form of a loan. A generous gift from the Marren family and a grant from the Catholic Extension Society of Chicago repaid the loan to the Diocese and resulted in naming the parish after Mother Frances Xavier Cabrini. Mother Cabrini was canonized in 1947, the same year as the founding of the Yucaipa parish. She was North America’s first saint, and the Yucaipa parish was one of the first in the world to bear her name.

For twelve years, from 1993 – 2005, the community of St. Frances was served by Reverend Kenneth Jenkins as Pastor. In 2005 the parish began a new model of leadership, that of a Pastoral Coordinator and Priest Minister. Kirsten Thorstad was appointed as Pastoral Coordinator and Reverend Joseph Cornely, S.T as Priest Minister beginning July 2005. In July 2006, Reverend David Andel was appointed as Priest Minister. In July 2014, Fr. Santos Ortega was installed as the Pastor of St. Frances X. Cabrini Church.

St. Frances Xavier Cabrini Catholic Church serves the entire Yucaipa Valley located between the San Bernardino Mountains to the North and the communities of Beaumont and Banning to the southeast. The parish serves more than 1,950 households in the communities of Yucaipa, Calimesa, Oak Glen, Cherry Valley, Mentone, Forest Falls, Mountain Home Village and Angelus Oaks.

The youngest of thirteen children, St. Frances Xavier Cabrini was born on July 15, 1850 in a small village called Sant’Angelo Lodigiano near the city of Milan, Italy. She grew up enthralled by the stories of missionaries and made up her mind to join a religious order.

Because of her frail health, she was not permitted to join the Daughters of the Sacred Heart who had been her teachers and under whose guidance she obtained her teaching certificate.

However, in 1880, with seven young women, Frances founded the Institute of the Missionary Sisters of the Sacred Heart of Jesus.

She was as resourceful as she was prayerful, finding people who would donate what she needed in money, time, labor, and support.

She and her Sisters wanted to be missionaries in China and despite all obstacles; she visited Rome to obtain an audience with Pope Leo XIII.

The Pope told Frances to go “not to the East, but to the West” to New York rather than to China as she had expected. She was to help the thousands of Italian immigrants already in the United States.

In 1889, New York seemed to be filled with chaos and poverty, and into this new world stepped Mother Frances Cabrini and her Sister companions.

Cabrini organized catechism and education classes for the Italian immigrants and provided for the needs of the many orphans. She established schools and orphanages despite tremendous odds.

Soon, requests for her to open schools came to Frances Cabrini from all over the world. She traveled to Europe, Central and South America, and throughout the United States. She made 24 trans-Atlantic crossings and established 67 institutions: schools, hospitals, and orphanages.

Her activity was relentless until her death. On December 22, 1917, in Chicago, she died. In 1946, she was canonized a saint by Pope Pius XII in recognition of her holiness and service to mankind.

Today the Missionary Sisters, their lay collaborators, and volunteers work as teachers, nurses, social workers, administrators, and members of institutional boards of trustees.

They can be found on six continents and 17 countries throughout the world; wherever there is a need.